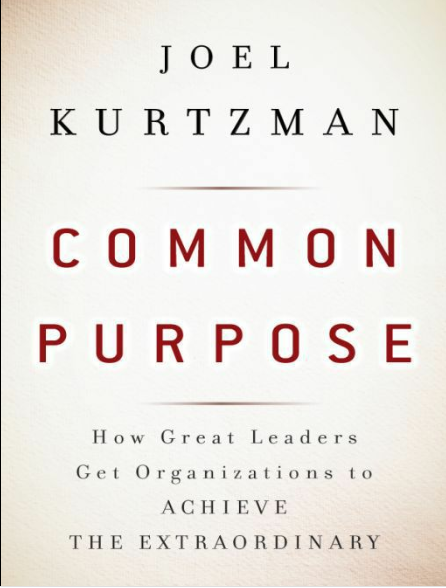 1. What is common purpose? To me, it is that rare, almost palpable experience that happens when a leader coalesces a group, team, or community into a creative, dynamic, brave, and nearly invincible we.

2. Common purpose is based on a simple idea: the leader is not separate from the group he or she leads. Rather, the leader is the organization’s glue—the force that binds it together, sets its direction, and makes certain that the group functions as one.

3. Making all eighty thousand employees understand what the company’s brand stood for. “If everyone understands that,” he said, “we won’t need thick employee manuals, management training programs, or pricing schedules for the services we sell. Everyone will instinctively do the right thing.”

4. The easiest way to create a sense of us or we—unfortunately—is to create the specter of them.

5. And while us-versus-them is a shortcut toward common purpose, it can also be a stepping-stone to chaos, doom, and organized opposition.

6. As Joe Griesedieck, vice chairman and managing director of CEO services at Korn/Ferry, the world’s largest search firm, told me, A players pick other A players with whom they surround themselves and from whom they build their teams. But B players pick B and even C players to prevent their leadership from being challenged. Over time, B players are succeeded by the B and then C players they picked. And since leaders in hierarchical organizations can’t really be challenged, the tyranny of the B player is preserved.

7.  For decades, studies around the world have confirmed that the overwhelming majority of people work for more than a paycheck. Research confirms that human beings working within organizations want to make a difference and be heard and recognized for their achievements

8. The organizations that survive do so by allowing people to develop in ways that make them more productive and responsive to changes in the environment.

9. People have a need to be heard, to be respected, and to control their space. Great leaders—common purpose leaders—grant them their space, give them their trust, allow them responsibility, and present them with opportunities and resources to do their jobs. But great leaders also hold people accountable. In other words, great leaders treat the people they work with as adults, which the current employment compact supports.

10. Once you discover that some negative people cannot rid themselves of their negativity, they must be allowed to find their purpose, passion, and opportunities elsewhere, Fourtou said.

12. “You must be brutal and quick. When someone doesn’t work out, you have to get rid of them. And you have to do it fast. If they don’t uphold your values and vision, if they don’t come around to your goals, they can do real damage. The biggest HR mistakes we’ve made were when we waited too long to fire someone because we thought that person might change.”

14. Leadership is really about guiding, coaching, or even inspiring others to reach a goal. Sometimes a leader stands in front, sometimes to the side, sometimes even behind the people he or she is trying to help reach a goal.

15. Individuals take their cues from the way other people in the organization behave. People within organizations tend to model the behavior of the people at the top.

16. When the people at the top of an organization are greedy or mistrustful, it is impossible to keep that type of behavior from permeating the entire organization.

17. In research I conducted for a project on start-ups, I discovered that the chances of a company’s success are increased by as much as 30 percent when the founders of a company have worked together in the past.

18. The job of a leader is to set goals, measure progress, hold people accountable, and remove obstacles from each team member’s path.

19. While it may seem trite, the fact is that the best results come from people who treat others with respect, recognize recognize their contributions, and enlist their help.

20. You cannot have a common purpose organization unless everyone is onboard with the same goals.

21. It is difficult to overstress how important it is for teams of people working together to meet informally from time to time.

22. Rather than obsessing about the competition, organizations should focus on the people they want to serve. One company or firm succeeds against another not by attacking that company but by satisfying its own clients’ needs.

24. “Positive emotions, like those associated with praise, have the effect of opening people up. When they are open, they are receptive to guidance, new ideas, and new ways of thought. When the atmosphere is positive, people are more likely to take risks.”

25. In a flat organization, micromanaging is not only counterproductive and just plain stupid, it is destructive to the individual’s sense of well-being because it creates high levels of negative stress.

26. We should not simply tolerate our jobs, the way we tolerate a bad-tasting medicine when we’re sick. We should enjoy them.

27. In many organizations, however, asking for help is a sign of weakness. Leaders must be watchful for that belief and deal with it brutally. Organizations grow and become more competent when information is exchanged.

28. The lesson from the Italian restaurant in Kyoto was that real leadership is a resource that is largely based on knowledge, and that knowledge must renewed. What you learned in college or graduate school, what you learned on your first job, might form the basis for how you lead. But you must make “pilgrimages” on a regular basis to see what innovative leaders are doing.

29. Organizations that are not afraid to brook dissent are among the most powerful and long-living organizations around. The motto “Think,” which has guided IBM for more than half a century, is powerful and compelling because it is respectful of the individual and his or her ability to contribute. And while an organization that asks people to think may be messier and more clamorous than one that requires them to obey, IBM’s long-running success is testament to the power that can be generated when free-thinking individuals align their interests in pursuit of a goal.

30. Leaders who help their teams achieve aims beyond their expectations find that they have no difficulty recruiting people to join them.

31. Working on a great team, with great leaders, provides a boost to any individual’s career.

33. Leaders must take it on themselves to make certain that the values their organizations express are the right ones. I say that because a further conclusion of my early study of systems was that values determine whether an organization will survive or fail.

34. And as Jean-René Fourtou said, people who demand too much, do not contribute, or are naysayers and negative will take every second of a leader’s time if given the chance. To put it bluntly, these people should be dismissed.

35. What all this means is that one primary, and usually overlooked, job of leaders is to prevent the buildup of organizational toxins.

37. Ideas are especially important in today’s highly competitive economy because the surest way to succeed is by out-innovating your rivals. Innovation is the application of creativity to solve problems and create lasting advantage.

38. Leaders must spend a lot of time searching for ideas.

39. To be a leader, we must view ourselves as capable of creating change. We must wake up each morning with the belief that the organization in which we work can be bent to the will of a group of thoughtful human beings.