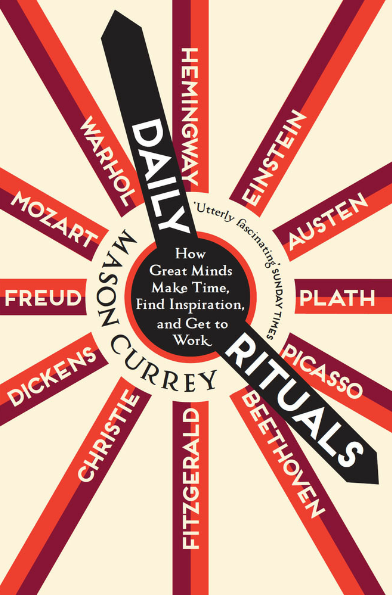 1. A solid routine fosters a well-worn groove for one’s mental energies and helps stave off the tyranny of moods.

2. “A modern stoic,” he observed, “knows that the surest way to discipline passion is to discipline time: decide what you want or ought to do during the day, then always do it at exactly the same moment every day, and passion will give you no trouble.”

3. When he did find the time to compose, Feldman employed a strategy that John Cage taught him—it was “the most important advice anybody ever gave me,” Feldman told a lecture audience in 1984. “He said that it’s a very good idea that after you write a little bit, stop and then copy it. Because while you’re copying it, you’re thinking about it, and it’s giving you other ideas. And that’s the way I work. And it’s marvelous, just wonderful, the relationship relationship between working and copying.”

4. All those I think who have lived as literary men,—working daily as literary labourers,—will agree with me that three hours a day will produce as much as a man ought to write.

5. Isaiah Berlin describes Marx’s habits during this time: His mode of living consisted of daily visits to the British [Museum] reading-room, where he normally remained

6. And although he had many patients who relied on him, Jung was not shy about taking time off; “I’ve realized that somebody who’s tired and needs a rest, and goes on working all the same is a fool,” he said.

7. In Everybody’s Autobiography, Stein confirmed that she had never been able to write much more than half an hour a day—but added, “If you write a half hour a day it makes a lot of writing year by year. To be sure all day and every day you are waiting around to write that half hour a day.”

8. When he is writing a novel, Murakami wakes at 4:00 A.M. and works for five to six hours straight. In the afternoons he runs or swims (or does both), runs errands, reads, and listens to music; bedtime is 9:00. “I keep to this routine every day without variation,” he told The Paris Review in 2004. “The repetition itself becomes the important thing; it’s a form of mesmerism. I mesmerize myself to reach a deeper state of mind.”

9. “Inspiration is for amateurs,” Close says. “The rest of us just show up and get to work.”

10. “My experience has been that most really serious creative people I know have very, very routine and not particularly glamorous work habits” - John Adams

11. The more of the details of our daily life we can hand over to the effortless custody of automatism, the more our higher powers of mind will be set free for their own proper work. There is no more miserable human being than one in whom nothing is habitual but indecision, and for whom the lighting of every cigar, the drinking of every cup, the time of rising and going to bed every day, and the beginning of every bit of work, are subjects of express volitional deliberation.

12. “I find that having a job is one of the best things in the world that could happen to me,” he once said. “It introduces discipline and regularity into one’s life. I am just as free as I want to be and of course I have nothing to worry about about money.” - Wallace Stevens

13. Angelou has never been able to write at home.

14. He was dismissive of inspiration, saying that if he waited for the muse he would compose at most three songs a year. It was better to work every day. “Like the pugilist,” Gershwin said, “the songwriter must always keep in training.”

15. Heller wrote Catch-22 in the evenings after work, sitting at the kitchen table in his Manhattan apartment. “I spent two or three hours a night on it for eight years,”

16. As a young apprentice in Thomas Edison’s New York office, Tesla regularly worked from 10:30 in the morning until 5:00 the following morning. (“I’ve had many hardworking assistants, but you take the cake,” Edison told him.) Later, after he had started his own company, Tesla arrived at the office at noon. Immediately, his secretary would draw the blinds; Tesla worked best in the dark and would raise the blinds again only in the event of a lightning storm, which he liked to watch flashing above the cityscape from his black mohair sofa. He typically worked at the office until midnight, with a break at 8:00 for dinner in the Palm Room of the Waldorf-Astoria hotel.

17. “Be regular and orderly in your life like a Bourgeois so that you may be violent and original in your work.” - William Styron

18. Descartes believed that idleness was essential to good mental work, and he made sure not to overexert himself.

19. Dickens was prolific—he produced fifteen novels, ten of which are longer than eight hundred pages, and numerous stories, essays, letters, and plays—but he could not be productive without certain conditions in place. First, he needed absolute quiet; at one of his houses, an extra door had to be installed to his study to block out noise. And his study had to be precisely arranged, with his writing desk placed in front of a window and, on the desk itself, his writing materials—goose-quill pens and blue ink—laid out alongside several ornaments: a small vase of fresh flowers, a large paper knife, a gilt leaf with a rabbit perched upon it, and two bronze statuettes (one depicting a pair of fat toads dueling, the other a gentleman swarmed with puppies).

20. The morning is the best time, there are no people around.

21. “The overriding factor in my life between the ages of six and twenty-two was my father’s candy store,” Asimov wrote in his posthumously published memoir. His father owned a succession of candy stores in Brooklyn, which he opened at 6:00 A.M. and closed at 1:00 A.M., seven days a week. I have kept the candy-store hours all my life. I wake at five in the morning. I get to work as early as I can. I work as long as I can. I do this every day in the week, including holidays. I don’t take vacations voluntarily and I try to do my work even when I’m on vacation. (And even when I’m in the hospital.) In other words, I am still and forever in the candy store.

22. (Stephen) King writes every day of the year, including his birthday and holidays, and he almost never lets himself quit before he reaches his daily quota of two thousand words.

23. (Georges) Simenon was one of the most prolific novelists of the twentieth century, publishing 425 books in his career. The Belgian-French novelist worked in intense bursts of literary activity, each lasting two or three weeks, separated by weeks or months of no writing at all.