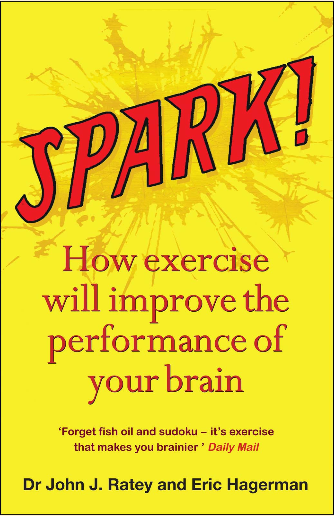 1.       In order for man to succeed in life, God provided him with two means, education and physical activity. Not separately, one for the soul and the other for the body, but for the two together. With these two means, man can attain perfection. —Plato

2.       It was already known that exercise increases levels of serotonin, norepinephrine, and dopamine—important neurotransmitters that traffic in thoughts and emotions.

3.       They don’t know that toxic levels of stress erode the connections between the billions of nerve cells in the brain or that chronic depression shrinks certain areas of the brain. And they don’t know that, conversely, exercise unleashes a cascade of neurochemicals and growth factors that can reverse this process, physically bolstering the brain’s infrastructure. In fact, the brain responds like muscles do, growing with use, withering with inactivity.

4.       It turns out that moving our muscles produces proteins that travel through the bloodstream and into the brain, where they play pivotal roles in the mechanisms of our highest thought processes. They bear names such as insulin-like growth factor (IGF-1) and vascular endothelial growth factor (VEGF), and they provide an unprecedented view of the mind-body connection.

5.       In October of 2000 researchers from Duke University made the New York Times with a study showing that exercise is better than sertraline (Zoloft) at treating depression.

6.       If exercise came in pill form, it would be plastered across the front page, hailed as the blockbuster drug of the century.

7.       In Naperville, Illinois, gym class has transformed the student body of nineteen thousand into perhaps the fittest in the nation. Among one entire class of sophomores, only 3 percent were overweight, versus the national average of 30 percent. What’s more surprising—stunning—is that the program has also turned those students into some of the smartest in the nation. In 1999 Naperville’s eighth graders were among some 230,000 students from around the world who took an international standards test called TIMSS (Trends in International Mathematics and Science Study), which evaluates knowledge of math and science. In recent years, students in China, Japan, and Singapore have outpaced American kids in these crucial subjects, but Naperville is the conspicuous exception: when its students took the TIMSS, they finished sixth in math and first in the world in science.

8.        Few researchers have tackled the question, although one study from Virginia Tech showed that cutting gym class and allocating more time to math, science, and reading did not improve test scores, as so many school administrators assume it will. Because gym class can mean so many things, research in this area has focused on the correlation between physical fitness and academic achievement. The most telling studies come from the California Department of Education (CDE). Over the past five years, the CDE has consistently shown that students with higher fitness scores also have higher test scores.

9.       In 2001 fit kids scored twice as well on academic tests as their unfit peers. Among California’s 279,000 ninth graders, for instance, those who scored a six on the FitnessGram ranked, on average, in the sixty-seventh percentile in math and the forty-fifth percentile in reading on the Stanford Achievement Test. If these scores seem less than stellar, consider those of the students who passed only one of the six areas: they ranked in the thirty-fifth and twenty-first percentiles, respectively.

10.   Indeed, studies suggest that simply getting on the scale every morning improves the likelihood that someone who’s overweight will shed pounds.

11.   In 2005 the physical education staff expanded gym from one class a week to forty-five minutes a day, focused almost entirely on cardiovascular activity. In the span of one school year, the students’ fitness levels improved dramatically, and counselors reported that the number of incidents involving violence at Woodland decreased decreased from 228 to 95 for the year.

13.   Only a mobile creature needs a brain, points out New York University neurophysiologist Rodolfo Llinás in his 2002 book, I of the Vortex: From Neurons to Self. To illustrate, he uses the example of a tiny jellyfish-like animal called a sea squirt: Born with a simple spinal cord and a three hundred–neuron “brain,” the larva motors around in the shallows until it finds a nice patch of coral on which to put down its roots. It has about twelve hours to do so, or it will die. Once safely attached, however, the sea squirt simply eats its brain. For most of its life, it looks much more like a plant than an animal, and since it’s not moving, it has no use for its brain. Llinás’s interpretation: “That which we call thinking is the evolutionary internalization of movement.”

14.   Indeed, in a 2007 study of humans, German researchers found that people learn vocabulary words 20 percent faster following exercise than they did before exercise, and that the rate of learning correlated directly with levels of BDNF.

15.   Learning and memory evolved in concert with the motor functions that allowed our ancestors to track down food, so as far as our brains are concerned, if we’re not moving, there’s no real need to learn anything.

16.   One thing scientists know for sure is that you can’t learn difficult material while you’re exercising at high intensity because blood is shunted away from the prefrontal cortex, and this hampers your executive function.

17.    An imbalance of these neurotransmitters is why some people with attention-deficit/hyperactivity disorder (ADHD) come across as stress junkies. They have to get stressed to focus.

18.   If you exercise or even just socialize, you’re tapping into the evolutionary antidote to stress.

19.   Studies show that if researchers exercise rats that have been chronically stressed, that activity makes the hippocampus grow back to its preshriveled state. The mechanisms by which exercise changes how we think and feel are so much more effective than donuts, medicines, and wine. When you say you feel less stressed out after you go for a swim, or even a fast walk, you are.

20.   Just keep in mind that the more stress you have, the more your body needs to move to keep your brain running smoothly.

21.   A massive Dutch study of 19,288 twins and their families published in 2006 showed that exercisers are less anxious, less depressed, less neurotic, and also more socially outgoing.

22.    Exercise also boosts dopamine, which improves mood and feelings of wellness and jump-starts the attention system. Dopamine is all about motivation and attention. Studies have shown that chronic exercise increases dopamine storage in the brain and also triggers the production of enzymes that create dopamine receptors in the reward center of the brain, and this provides a feeling of satisfaction when we have accomplished something.

23.   A study in London in 2004 showed that even ten minutes of exercise could blunt an alcoholic’s craving.

24.   The fact that exercise counteracts anxiety and depression directly can have a huge impact on any form of addiction, as both of these mood states undermine treatment.

25.   And while I often suggest that people exercise in the morning, if your goal is to break a habit such as having a drink every night when you come home, exercising in the evening is probably a better strategy. You can use the aerobic shot for a different kind of buzz.

26.   Specifically, every fifty minutes of weekly exercise correlated to a 50 percent drop in the odds of being depressed.

27.   Population studies have shown that countries in which people eat a lot of fish have lower incidence of bipolar disorder. And some people use omega-3s as a stand-alone treatment for mood disorders and ADHD.

28.   AEROBIC. Exercise four days a week, varying from thirty minutes to an hour, at 60 to 65 percent of your maximum heart rate. At this level, you’ll be burning fat in the body and generating the ingredients necessary for all the structural changes in the brain I’ve discussed.

29.   STRENGTH. Hit the weights or resistance machines twice a week, doing three sets of your exercises at weights that allows you to do ten to fifteen repetitions in each set.

30.   BALANCE AND FLEXIBILITY. Focus on these abilities twice a week for thirty minutes or so. Yoga, Pilates, tai chi, martial arts, and dance all involve these skills, which are important to staying agile.