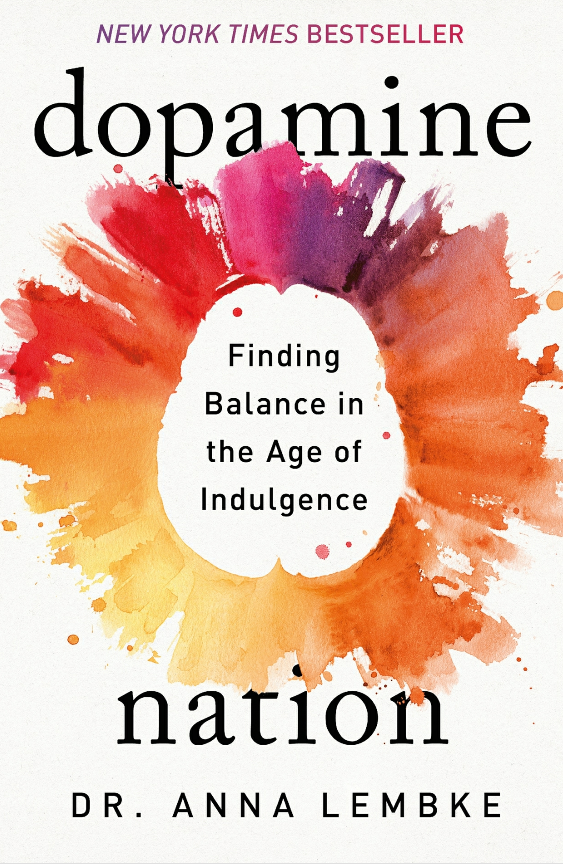 1.In Dopamine Nation, Dr Anna Lembke, psychiatrist and author, explores the exciting new scientific discoveries that explain why the relentless pursuit of pleasure leads to pain . . . and what to do about it.

2. Scientists rely on dopamine as a kind of universal currency for measuring the addictive potential of any experience. The more dopamine in the brain’s reward pathway, the more addictive the experience.

3. In addition to the discovery of dopamine, one of the most remarkable neuroscientific findings in the past century is that the brain processes pleasure and pain in the same place.

5. Prohibition led to a sharp decrease in the number of Americans consuming and becoming addicted to alcohol. Rates of public drunkenness and alcohol-related liver disease decreased by half during this period in the absence of new remedies to treat addiction.

6. The question is: Why, in a time of unprecedented wealth, freedom, technological progress, and medical advancement, do we appear to be unhappier and in more pain than ever? The reason we’re all so miserable may be because we’re working so hard to avoid being miserable.

7. Neuroscientific advances in the last fifty to one hundred years, including advances in biochemistry, new imaging techniques, and the emergence of computational biology, shed light on fundamental reward processes. By better understanding the mechanisms that govern pain and pleasure, we can gain new insight into why and how too much pleasure leads to pain.

8. Dopamine is not the only neurotransmitter involved in reward processing, but most neuroscientists agree it is among the most important. Dopamine may play a bigger role in the motivation to get a reward than the pleasure of the reward itself. Wanting more than liking. Genetically engineered mice unable to make dopamine will not seek out food, and will starve to death even when food is placed just inches from their mouth. Yet if food is put directly into their mouth, they will chew and eat the food, and seem to enjoy it.

9. For a rat in a box, chocolate increases the basal output of dopamine in the brain by 55 percent, sex by 100 percent, nicotine by 150 percent, and cocaine by 225 percent. Amphetamine, the active ingredient in the street drugs “speed,” “ice,” and “shabu” as well as in medications like Adderall that are used to treat attention deficit disorder, increases the release of dopamine by 1,000 percent. By this accounting, one hit off a meth pipe is equal to ten orgasms.

11. Imagine our brains contain a balance—a scale with a fulcrum in the center. When nothing is on the balance, it’s level with the ground. When we experience pleasure, dopamine is released in our reward pathway and the balance tips to the side of pleasure. The more our balance tips, and the faster it tips, the more pleasure we feel.

12. But here’s the important thing about the balance: It wants to remain level, that is, in equilibrium. It does not want to be tipped for very long to one side or another. Hence, every time the balance tips toward pleasure, powerful self-regulating mechanisms kick into action to bring it level again. These self-regulating mechanisms do not require conscious thought or an act of will. They just happen, like a reflex.

13. Once the balance is level, it keeps going, tipping an equal and opposite amount to the side of pain.

14. In the 1970s, social scientists Richard Solomon and John Corbit called this reciprocal relationship between pleasure and pain the opponent-process theory: “Any prolonged or repeated departures from hedonic or affective neutrality . . . have a cost.”

15. With repeated exposure to the same or similar pleasure stimulus, the initial deviation to the side of pleasure gets weaker and shorter and the after-response to the side of pain gets stronger and longer, a process scientists call neuroadaptation. That is, with repetition, our gremlins get bigger, faster, and more numerous, and we need more of our drug of choice to get the same effect.

16. With prolonged, heavy drug use, the pleasure-pain balance eventually gets weighted to the side of pain. Our hedonic (pleasure) set point changes as our capacity to experience pleasure goes down and our vulnerability to pain goes up.

18. As Dr. Volkow and her colleagues wrote, “The decreases in DA D2 receptors in the drug abusers, coupled to the decreases in DA release, would result in a decreased sensitivity of reward circuits to stimulation by natural rewards.” Once this happens, nothing feels good anymore.

19. Here’s the good news. If we wait long enough, our brains (usually) readapt to the absence of the drug and we reestablish our baseline homeostasis: a level balance. Once our balance is level, we are again able to take pleasure in everyday, simple rewards. Going for a walk. Watching the sun rise. Enjoying a meal with friends.

20. A month is usually the minimum amount of time it takes to reset the brain’s reward pathway.

21. Abstinence is necessary to restore homeostasis, and with it our ability to get pleasure from less potent rewards, as well as see the true cause and effect between our substance use and the way we’re feeling. To put it in terms of the pleasure-pain balance, fasting from dopamine allows sufficient time for the gremlins to hop off the balance and for the balance to go back to the level position.

22. Marc Schuckit and his colleagues studied a group of men who were drinking alcohol daily in large quantities and also met criteria for clinical depression, or what is called major depressive disorder.

23. The depressed men in Schuckit’s study went into the hospital for four weeks, during which time they received no treatment for depression, other than stopping alcohol. After one month of not drinking, 80 percent no longer met criteria for clinical depression. This finding implies that for the majority, clinical depression was the result of heavy drinking and not a co-occurring depressive disorder.

24. Which brings us to an important caveat: I never suggest a dopamine fast to individuals who might be at risk to suffer life-threatening withdrawal if they were to quit all of a sudden, as in cases of severe alcohol, benzodiazepine (Xanax, Valium, or Klonopin), or opioid dependence and withdrawal. For those patients, medically monitored tapering is necessary.

25. A minority of patients (about 20 percent) don’t feel better after the dopamine fast. That’s important data too, because it tells me that the drug wasn’t the main driver of the psychiatric symptom and that the patient likely has a co-occurring psychiatric disorder that will require its own treatment.

26. The key to creating effective self-binding is first to acknowledge the loss of voluntariness we experience when under the spell of a powerful compulsion, and to bind ourselves while we still possess the capacity for voluntary choice.

27. If we wait until we feel the compulsion to use, the reflexive pull of seeking pleasure and/or avoiding pain is nearly impossible to resist. In the throes of desire, there’s no deciding.

28. But by creating tangible barriers between ourselves and our drug of choice, we press the pause button between desire and action.

30. Self-binding is not fail-safe, particularly for those with severe addictions. It too can fall prey to self-deception, bad faith, and faulty science. But it is a good and necessary place to start.

32. Physical self-binding is now available from your local apothecary. Instead of locking our drugs away in a file cabinet, we have the option of imposing locks at the cellular level. The medication naltrexone is used to treat alcohol and opioid addiction, and is being used for a variety of other addictions as well, from gambling to overeating to shopping. Naltrexone blocks the opioid receptor, which in turn diminishes the reinforcing effects of different types of rewarding behavior.

33. Another form of self-binding is the use of time limits and finish lines. By restricting consumption to certain times of the day, week, month, or year, we narrow our window of consumption and thereby limit our use. For example, we can tell ourselves we’ll consume only on holidays, only on weekends, never before Thursday, never before 5:00 p.m., and so on.

34. Categorical self-binding limits consumption by sorting dopamine into different categories: those subtypes we allow ourselves to consume, and those we do not. This method helps us to avoid not only our drug of choice but also the triggers that lead to craving for our drug. This strategy is especially useful for substances we can’t eliminate altogether but that we’re trying to consume in a healthier way, like food, sex, and smartphones.

35. Scientists at Charles University in Prague, writing in the European Journal of Applied Physiology, conducted an experiment in which ten men volunteered to submerge themselves (head out) in cold water (14 degrees Celsius) for one hour. This is 57 degrees Fahrenheit. Using blood samples, the researchers showed that plasma (blood) dopamine concentrations increased 250 percent, and plasma norepinephrine concentrations increased 530 percent as a result of cold-water immersion.

36. Michael’s accidental discovery of the benefits of ice-cold water immersion is an example of how pressing on the pain side of the balance can lead to its opposite— pleasure. Unlike pressing on the pleasure side, the dopamine that comes from pain is indirect and potentially more enduring. So how does it work?

37. Pain leads to pleasure by triggering the body’s own regulating homeostatic mechanisms. In this case, the initial pain stimulus is followed by gremlins hopping on the pleasure side of the balance.

38. With intermittent exposure to pain, our natural hedonic set point gets weighted to the side of pleasure, such that we become less vulnerable to pain and more able to feel pleasure over time.

39. Exercise has a more profound and sustained positive effect on mood, anxiety, cognition, energy, and sleep than any pill I can prescribe.

41. Scientists have shown that stress alone can increase the release of dopamine in the brain’s reward pathway, leading to the same brain changes seen with addictive drugs like cocaine and methamphetamine.

42. A study of skydivers compared to a control group (rowers) found that repeat skydivers were more likely to experience anhedonia, a lack of joy, in the rest of their lives.

43. People who lean too hard and too long on the pain side of the balance can also end up in a persistent dopamine deficit state.

44. If we consume too much pain, or in too potent a form, we run the risk of compulsive, destructive overconsumption. But if we consume just the right amount, “inhibiting great pain with little pain,” we discover the path to hormetic healing, and maybe even the occasional “fit of joy.”

45. In my clinical practice, I often see one member of a family get into recovery from addiction, followed quickly by another member of the family doing the same. I’ve seen husbands who stop drinking followed by wives who stop having affairs. I’ve seen parents who stop smoking pot followed by children who do the same.