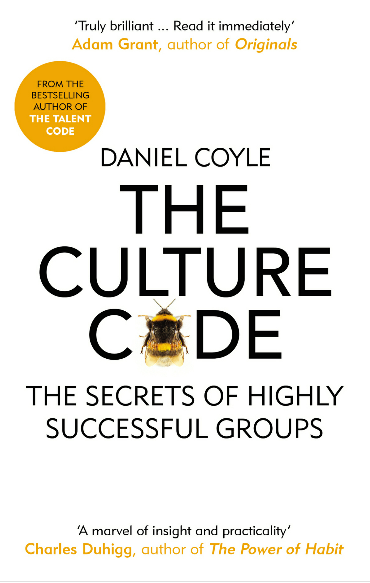 1. The Culture Code, Daniel Coyle, New York Times bestselling author of The Talent Code, goes inside some of the most effective organisations in the world and reveals their secrets. He not only explains what makes such groups tick, but also identifies the key factors that can generate team cohesion in any walk of life. He examines the verbal and physical cues that bring people together. He determines specific strategies that encourage collaboration and build trust.

2. Felps has brought in Nick to portray three negative archetypes: the Jerk (an aggressive, defiant deviant), the Slacker (a withholder of effort), and the Downer (a depressive Eeyore type). Nick is really good at being bad. In almost every group, his behavior reduces the quality of the group’s performance by 30 to 40 percent. The drop-off is consistent whether he plays the Jerk, the Slacker, or the Downer.

3. Jonathan’s group succeeds not because its members are smarter but because they are safer.

4. Safety is not mere emotional weather but rather the foundation on which strong culture is built. The deeper questions are, Where does it come from? And how do you go about building it?

5. When you ask people inside highly successful groups to describe their relationship with one another, they all tend to choose the same word. The word they use is family.

6.When I visited these (successful) groups, I noticed a distinct pattern of interaction. I made a list:

7. Belonging cues are behaviors that create safe connection in groups. They include, among others, proximity, eye contact, energy, mimicry, turn taking, attention, body language, vocal pitch, consistency of emphasis, and whether everyone talks to everyone else in the group. Like any language, belonging cues can’t be reduced to an isolated moment but rather consist of a steady pulse of interactions within a social relationship. Their function is to answer the ancient, ever-present questions glowing in our brains: Are we safe here? What’s our future with these people? Are there dangers lurking?

9. Group performance depends on behavior that communicates one powerful overarching idea: We are safe and connected.

11. Cohesion happens not when members of a group are smarter but when they are lit up by clear, steady signals of safe connection.

12. Belonging cues have to do not with character or discipline but with building an environment that answers basic questions: Are we connected? Do we share a future? Are we safe? Let’s take them one by one.

13. One misconception about highly successful cultures is that they are happy, lighthearted places. This is mostly not the case. They are energized and engaged, but at their core their members are oriented less around achieving happiness than around solving hard problems together. This task involves many moments of high-candor feedback, uncomfortable truth-telling, when they confront the gap between where the group is, and where it ought to be.

14. Proximity functions as a kind of connective drug. Get close, and our tendency to connect lights up.

15. For the vast majority of human history, sustained proximity has been an indicator of belonging—after all, we don’t get consistently close to someone unless it’s mutually safe.

16. One study found that workers who shared a location emailed one another four times as often as workers who did not, and as a result they completed their projects 32 percent faster.

17. Relatedly, it’s important to avoid interruptions. The smoothness of turn taking, as we’ve seen, is a powerful indicator of cohesive group performance. Interruptions shatter the smooth interactions at the core of belonging. They are so discohesive, in fact, that Waber uses interruption metrics as sales training tools. “When you can show someone numbers that the top salespeople hardly ever interrupt people, and then rate them on that scale, you can deliver a powerful message,”

18. Spotlight Your Fallibility Early On—Especially If You’re a Leader: In any interaction, we have a natural tendency to try to hide our weaknesses and appear competent. If you want to create safety, this is exactly the wrong move. Instead, you should open up, show you make mistakes, and invite input with simple phrases like “This is just my two cents.” “Of course, I could be wrong here.” “What am I missing?” “What do you think?”

20. Embrace the Messenger: One of the most vital moments for creating safety is when a group shares bad news or gives tough feedback. In these moments, it’s important not simply to tolerate the difficult news but to embrace it. “You know the phrase ‘Don’t shoot the messenger’?” Edmondson says. “In fact, it’s not enough to not shoot them. You have to hug the messenger and let them know how much you need that feedback. That way you can be sure that they feel safe enough to tell you the truth next time.”

21. Overdo Thank-Yous: When you enter highly successful cultures, the number of thank-yous you hear seems slightly over the top.

22. This is because thank-yous aren’t only expressions of gratitude; they’re crucial belonging cues that generate a contagious sense of safety, connection, and motivation.

23. Be Painstaking in the Hiring Process: Deciding who’s in and who’s out is the most powerful signal any group sends, and successful groups approach their hiring accordingly.

24. Eliminate Bad Apples: The groups I studied had extremely low tolerance for bad apple behavior and, perhaps more important, were skilled at naming those behaviors. The leaders of the New Zealand All-Blacks, the rugby squad that ranks as one of the most successful teams on the planet, achieve this through a rule that simply states “No Dickheads.” It’s simple, and that’s why it’s effective.

25. Make Sure Everyone Has a Voice: Ensuring that everyone has a voice is easy to talk about but hard to accomplish. This is why many successful groups use simple mechanisms that encourage, spotlight, and value full-group contribution. For example, many groups follow the rule that no meeting can end without everyone sharing something.

26. Embrace Fun: This obvious one is still worth mentioning, because laughter is not just laughter; it’s the most fundamental sign of safety and connection.

27. “People tend to think of vulnerability in a touchy-feely way, but that’s not what’s happening,” Polzer says. “It’s about sending a really clear signal that you have weaknesses, that you could use help. And if that behavior becomes a model for others, then you can set the insecurities aside and get to work, start to trust each other and help each other. If you never have that vulnerable moment, on the other hand, then people will try to cover up their weaknesses, and every little microtask becomes a place where insecurities manifest themselves.”

28. Normally, we think about trust and vulnerability the way we think about standing on solid ground and leaping into the unknown: first we build trust, then we leap. But science is showing us that we’ve got it backward. Vulnerability doesn’t come after trust—it precedes it. Leaping into the unknown, when done alongside others, causes the solid ground of trust to materialize beneath our feet.

29. The mechanism of cooperation can be summed up as follows: Exchanges of vulnerability, which we naturally tend to avoid, are the pathway through which trusting cooperation is built.

30. One of the best things I’ve found to improve a team’s cohesion is to send them to do some hard, hard training.

31. One of the most useful tools was the After-Action Review. AARs happen immediately after each mission and consist of a short meeting in which the team gathers to discuss and replay key decisions. AARs are led not by commanders but by enlisted men. There are no agendas, and no minutes are kept.

32. Good AARs follow a template. “You have to do it right away,” Cooper says. “You put down your gun, circle up, and start talking. Usually you take the mission from beginning to end, chronologically. You talk about every decision, and you talk about the process.

33. Make Sure the Leader Is Vulnerable First and Often: As we’ve seen, group cooperation is created by small, frequently repeated moments of vulnerability. Of these, none carries more power than the moment when a leader signals vulnerability. As Dave Cooper says, I screwed that up are the most important words any leader can say.

35. Overcommunicate Expectations: The successful groups I visited did not presume that cooperation would happen on its own. Instead, they were explicit and persistent about sending big, clear signals that established those expectations, modeled cooperation, and aligned language and roles to maximize helping behavior.

36. Aim for Candor; Avoid Brutal Honesty: Giving honest feedback is tricky, because it can easily result in people feeling hurt or demoralized. One useful distinction, made most clearly at Pixar, is to aim for candor and avoid brutal honesty. By aiming for candor—feedback that is smaller, more targeted, less personal, less judgmental, and equally impactful—it’s easier to maintain a sense of safety and belonging in the group.

37. High-purpose environments are filled with small, vivid signals designed to create a link between the present moment and a future ideal. They provide the two simple locators that every navigation process requires: Here is where we are and Here is where we want to go.

40. Nonetheless a handful of “Ed-isms” are heard in Pixar’s corridors. Here are a few:

42. In the 1990s, sociologists James Baron and Michael Hannan analyzed the founding cultures of nearly two hundred technology start-ups in Silicon Valley. They found that most followed one of three basic models: the star model, the professional model, and the commitment model. The star model focused on finding and hiring the brightest people. The professional model focused on building the group around specific skill sets. The commitment model, on the other hand, focused on developing a group with shared values and strong emotional bonds. Of these, the commitment model consistently led to the highest rates of success. During the tech-bubble burst of 2000, the start-ups that used the commitment model survived at a vastly higher rate than the other two models, and achieved initial public offerings three times more often.